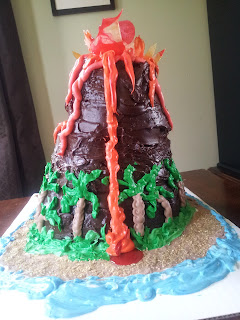 My son has a Blue &Gold Banquet for Cub Scouts and needed a cake to auction.  The theme is National Parks, so we created this volcano cake together.  He wanted lots of lava, so we took some of his LifeSaver candies, baked the red, white, and orange candies for a few minutes until they melted.  That formed the spew effect you see on top.

I'm no decorator and have never claimed to be, but for a novice it wasn't too bad with a 7 year old's input and shaky unsure hands.  What a mess he made...icing everywhere and he even dropped the "sand" on the kitchen floor, creating quite the hazard--that stuff is slick!

We had to carve the cake quite a bit and the cake (chocolate) was delicious.  The auction is tonight, so it will be interesting to see if anyone wants to bid on it.  It will be more interesting to see if the cake makes it to the auction.  It's so top heavy I can envision it falling in the car during its transport.  Don't worry; I will take pics of that, too, if it happens.  ;) 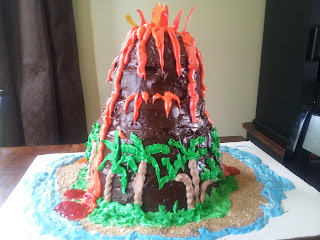 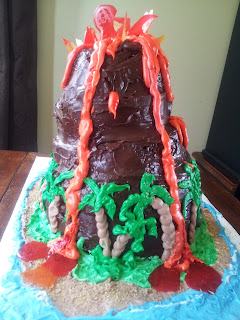 My son loved to sprinkle the "sand" and helped drizzle the lava down the volcano but his favorite part was putting the chocolate frosting on the volcano.  He had it up to his elbows.